Tonight, 23 comrades rallied to the call, and took part in the Party operations, bravely volunteering to take up the rifle, the launcher, and, if need be, the officers baton. Especially that last one

Missions Now, just in case you need a reminder, if you think commanding seems like fun, yet hesitate because you worry that you won't come up with a reasonable plan on such short notice, then check out our leadership programme.

Also, did you notice that some vehicles/players had way cool FA Tractors on them tonight? That's because of the power of our squad tags. Get yours whilst stocks last.
[/allegedly]
Top

The one and only mission I was able to make it to was pretty rad. After being the only survivor of our heli insertion team I made it down to the convoy to make my last stand. It was Grand!... Almost made it, NOT!

Altis Pirate Party
Started off with good coverage from east to west, but unfortunately the eastern front fell to the greater enemy numbers. GeEom attempted to flank from the west, but unfortunately was friendly fired. In the last few minutes I made it back to the building in a last ditch attempt to defend the objective, but it was 2v8. I managed to spray down 2 AAF riflemen (despite forgetting my gun was on semi-auto) as my last teammate fell, but was then - quite predictably - grenaded.

Promenade
After a promising start, things quickly went downhill as we approached the half way point of the mission. A1 and A2 were quickly picked off, leaving a crack squad of 4 men left in Alpha to push along the northern road. Soon enough, we were down to 3, then, after a quick firefight, it was down to Netkev and I, who had decided that it would be much safer to get behind the enemy force by swimming. Luckily, the tank and a single Bravo rifleman were still alive, and managed to bring us to victory. As most effective units, Netkev and I had a single kill between us.
I think it didn't help that someone forgot to refuel the server, and so there were a couple of encounters with the living dead: 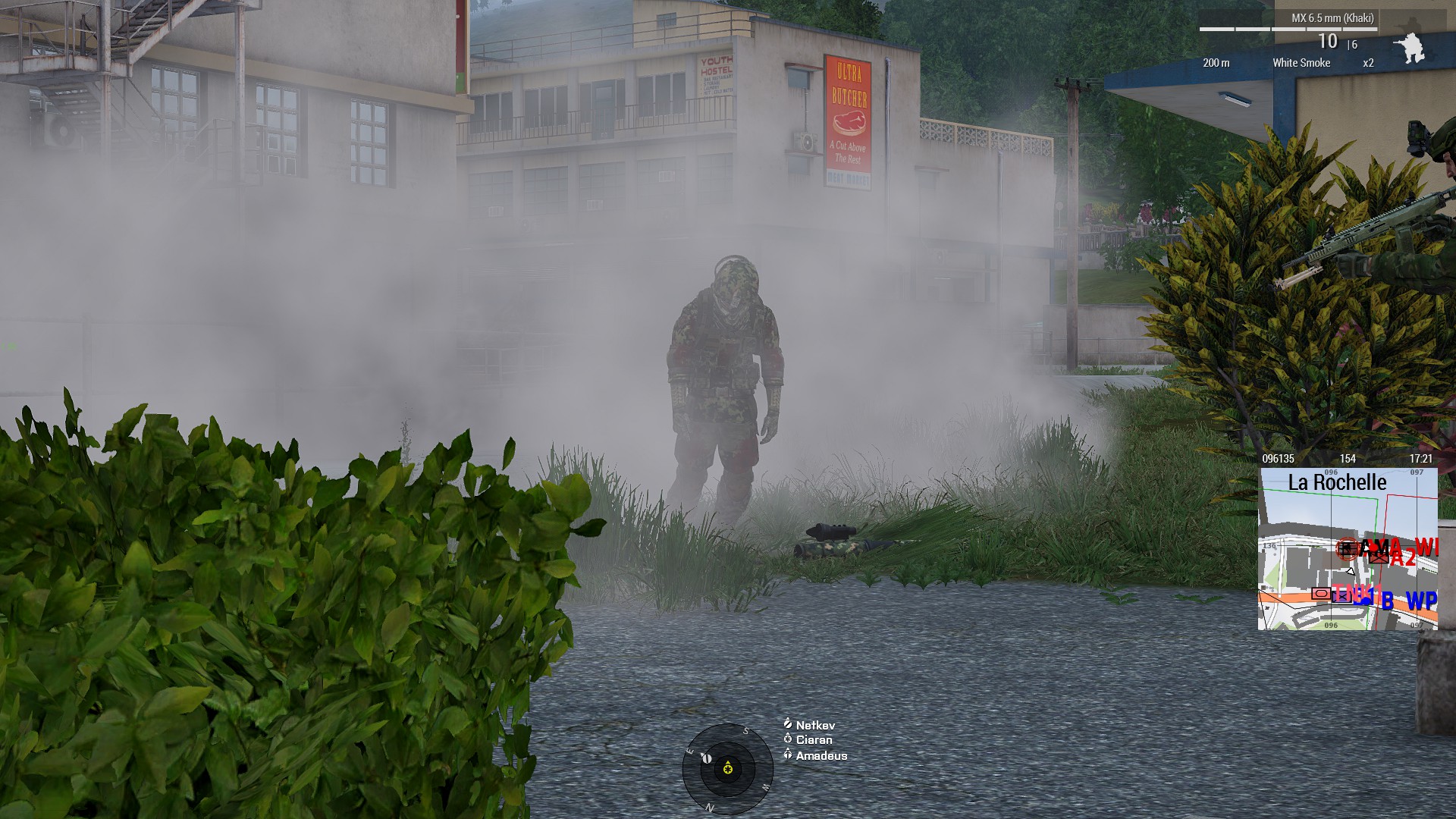 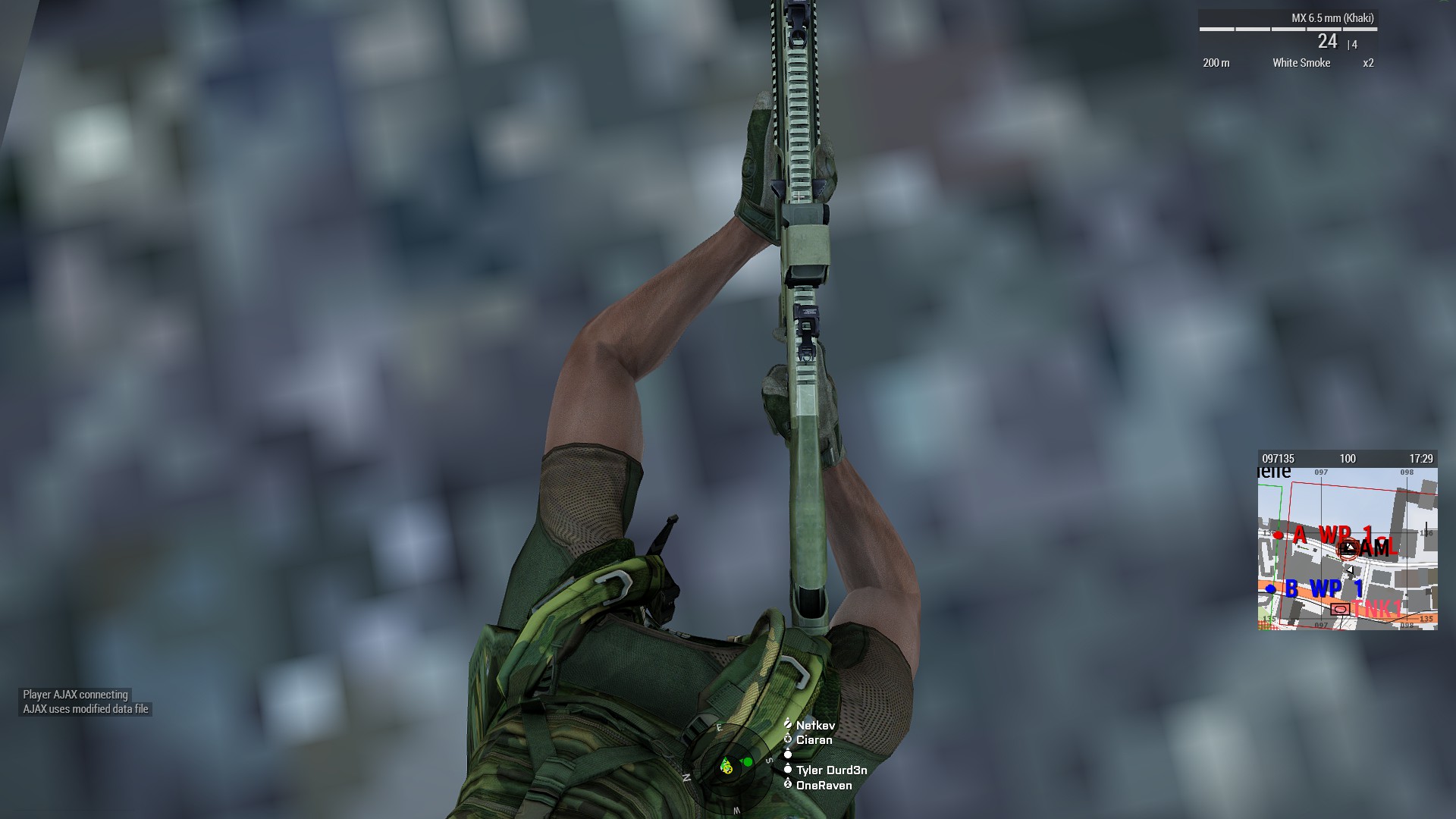 Signature, noun; a person's name written in a distinctive way as a form of identification in authorizing a cheque or document or concluding a letter.
Top

Promenade
Due to prior, and dare I say more dangerous engagements (putting kids down), I was only able to join this single opportunity to show my devotion to the revolution.

The mission began well, as is expected. We had a tank and we were safe in the belly of the beast. Once we had reached our destination it was indeed time to separate the boys from the boys without fear.
Upon exiting the vehicle we were fired upon (by albeit far inferior weaponry) in all directions by cowards and fascists hiding on the rooftops and in the gutters like the rats they are.
Our brother bravely pushed forward as a glorious iron fist and smashed through the pathetic defenses. We were a hot knife through already melted butter.

Moving and pushing as thunder we lost many brothers and sisters until alas Bravo squad was down to 3 brave mountains of men. Like rocks on a cold day, we rolled on through the town, crushing all in our path. It was here I was gifted, by the great potato in the sky, my moment to sacrifice my life. I was taken down by a weasel in the hills, safely tucked away with his camouflage clothing. Not even man enough to fight me mano-a-mano I was stopped in my tracks by his long range rifle. I do, however, believe my echos of anger guided my brothers onwards to find this vermin and slay him. They showed no mercy.

A rather late AAR post, but late than never.

Rebel Alliance - B1 AR: All was going well, the approach into Orino was very smooth with no casualties. We then swept about half way through the town with little incident, and then we hit the death spot. I believe I was the first to be taken out after rounding a corner only to find an EI walking towards me and taking a second too long to realise it wasn't a player despite how close it was. Most of the rest of B1 then fell shortly within the same area.

Altis Pirate Party - BLU A1 AR: Got shot quite early on while hiding in a bush. Then got to watch from spectator as some very interesting FF incidents occurred, on both sides.

Upward Mobility - B1 AR: This mission went very well, its the first time I've seen it won. Bravo was holding the Northern flank of the ambush, that was pulled off with extreme efficiency. It then devolved into miscellaneous firefights from all directions as we waited for the helos to air-lift the crates. I got downed fairly near the end of the mission whilst quite far from the rest of my fireteam, and thus got to bleed out knowing that I wouldn't get to share any of the money I had fought for.

Delivery Denied - OPFOR Ifrit Gunner: I was originally the driver but we had to swap due to a bug where the car constantly drove backwards if I was the driver. How that turned out is best illustrated by the below video, but lets just say it felt a little unsporting.

(Sorry you can't hear me, GeForce "Share" decided not to record my mic after the most recent update).
Ask and you shall receive
Top
Post Reply
5 posts • Page 1 of 1