Thanks to all that came out today for our games. Around 30 Loyal Farmers got plowed!

As always, comments are most welcome below. Also, if you have a nice story be sure to tell it. Videos are always much appreciated, and will be appropriated by our propaganda departement if you tell us about them.

If you think commanding seems like fun, yet hesitate because you worry that you won't come up with a reasonable plan on such short notice, then check out our leadership programme.

If you want to test out an updater/launcher for all your mod needs look no further than our Comrade head's marvellous contraption.

Did you notice that some vehicles/players had way cool FA Tractors on them tonight? That's because of the power of our squad tags. Get yours whilst stocks last.

Uncivil Engineering 2
SWAT B1 FTL
B1 performed admirably, we pushed from our entry point to the south clearing the suspected bomb sites, before sweeping in from the SE into the construction site. Quick movement meant by the time the remaining enemy realised we were entering the site we we already in cover from any outside fire.

Accidents may have happened by throwing a grenade instead of Smoke Heard what it seemed like enemy voices outside, accidentally shot at Dirty Harry in the process. Fortunately for both me and him my aim was off and it was just wounding shots.

In my defence Engineering teams are sneaky bastards with explosives, enough to raise anyone's suspicion.
Top


It cannot be said enough just how cool the bomb defuse aspect of this is. Its really cool.

Not much to say about this. I'm not a huge fan of Adversarial as they tend to highlight arma's flaws but this was pretty good, quaint fun.

Learning outcomes: We came in hard and fast. Not much beyond better communication could this have gone better.


AJAX "ok we need engineering FTL" Me: "is it complicated?"

This was a pretty cool mission. Myself, Syrian, Shadow and Peasant were tasked with staying alive and blow stuff up when the area was clear.

After initial staging we advanced up a hill and tried to hunker in the bunker. In relative safety of my comrades around me; I was shot at point black range in at least a 3 round burst. It was but a scratch but the warning was there. (note: Boarnoah needs to go dark for 3months minium).

At this point I became increasingly aware of Dark "Chozo" Chozo's eye. My team were...creative in my absence of direct commands every 5-10seconds. Syrian was grave robbing pistols, Shadow ran around like a headless chicken (throughout) and also presented himself to the gods by standing on a large rock for all to see. Peasant was suffering from the dreaded low 17fps (pretty standard) and walked into the enemy ass first.

As our task was to stay alive I felt we wouldn't face much contact but we faced our fair share. I myself easily totalled around 200 confirmed kills with my spar-16. (note: Total confirmed kills for whole team < 100 .
We were neck deep in shit and blood but we defended our little hill. Darkchozo was...not so impressed. "Can you guys just come here. Here to my position."

From this point on it was a farily standard afair. We blew up the 1st objective, crossed bridge (which was littered with skulls) and blew up the second objective. Job done.

Learning outcomes: We probably should have be sat on Darkchozo the entire time. We got ourselves a bit gun happy at times.

Mission:Jungle boogie
Role: Grunt
TL;DR: 30 comments on how dark it is.; I call hax.


So yeh it was dark this mission. No night vision, no moon light. Dark. Very dark. Like, really, really dark.

I killed someone because they were pretty much stood on top of me and prevented me from turning. GG


Probably the most imrpessive mission to date in terms of creativey. In reminded me of the level editor in Tony Hawks Pro skater 2.

We start underwater and try to take an oil Rig. I sent Netkev up first and as we followed we all died. I blame Netkev.

Learning outcomes: We had I think 3 points of entry. I think it might be worth pushing 2 and sending a 3rd team in reserve to which ever team had success.

I always feel pretty safe under AJAX's command. He just so confident and dreamy. So it was with great grief that when he was shot and wounded then blown up with a grenade that I had doubts about the success of this mission.

We did what we could with the FPS provided. What was left of my team was killed as we tried to get an eleveated vantage point. (trying desperately please CO Netkev).

And then, in the white light i heard a familar voice "Ok those dead re-enforce as bravo". Ajax died again and I tried to push with the team.

Gendar Marines
The sneaky bastards with explosives were out-sneaky-bastarded by the sneaky bastards with AKs. Luckily we managed to out-sneak them in the end, and proceeded to loot and pillage our way across the island. On our magical adventure, Shado' attempted to desert, so I fired a warning shot, causing Costno to become concerned. Luckily, everything was explained and Shado''s plan of desertion was foiled... Until he tried to desert again as we were about to cross the bridge, causing darkChozo to shout at us for not keeping up. Later we blew up a box (damn I hate boxes), then proceeded to hunt down the final box, which unfortunately had a sneaky bastard with an AK sat next to it, hiding in a bush. He decided it would be really funny if he sat in the bush, waited till half of our men had gone past, then shoot me in the back of the head. 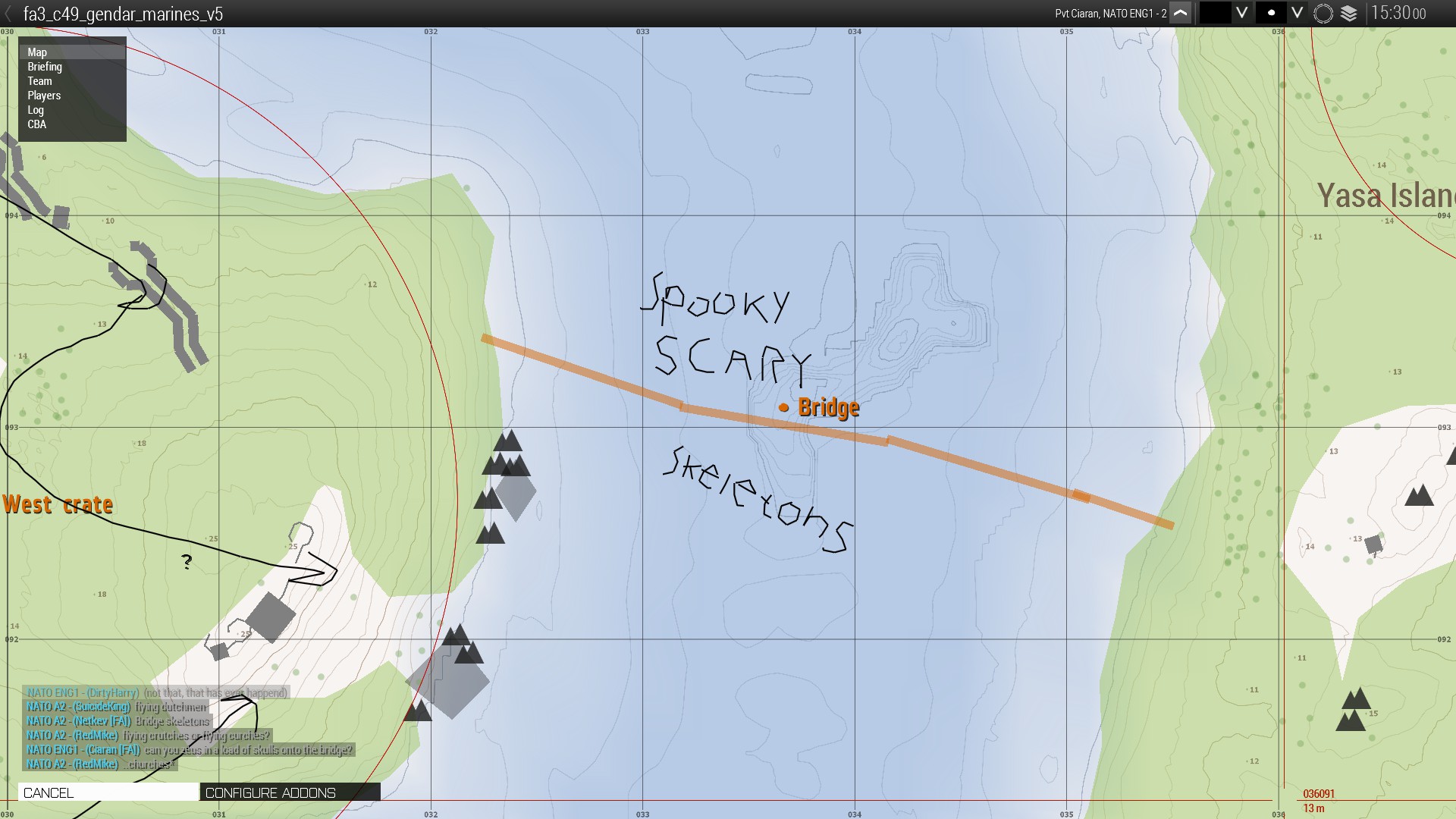 Promenade
A fun, 18 FPS average, mission. As AAA driver I had to battle against the raging Arma physics rather than the enemy. The last thing I heard was Teifiterror screaming "Behind!" before the enemy tank popped a shell into us.
Reslotted as Bravo Medic, under GeEom as BSL. I knew this was probably a mistake the second I clicked on the slot, and sure enough, the enemy tank struck us both down within 30 seconds of reaching the AO.
I then reslotted as HAT Gunner, once again under GeEom's command, where we decided to run up a hill outside of the AO, which turned out to be very much in the AO. Luckily, GeEom's quick thinking to run away as quickly as possible saved us, and although we didn't manage to kill anything, we did get a nice view from the hill. 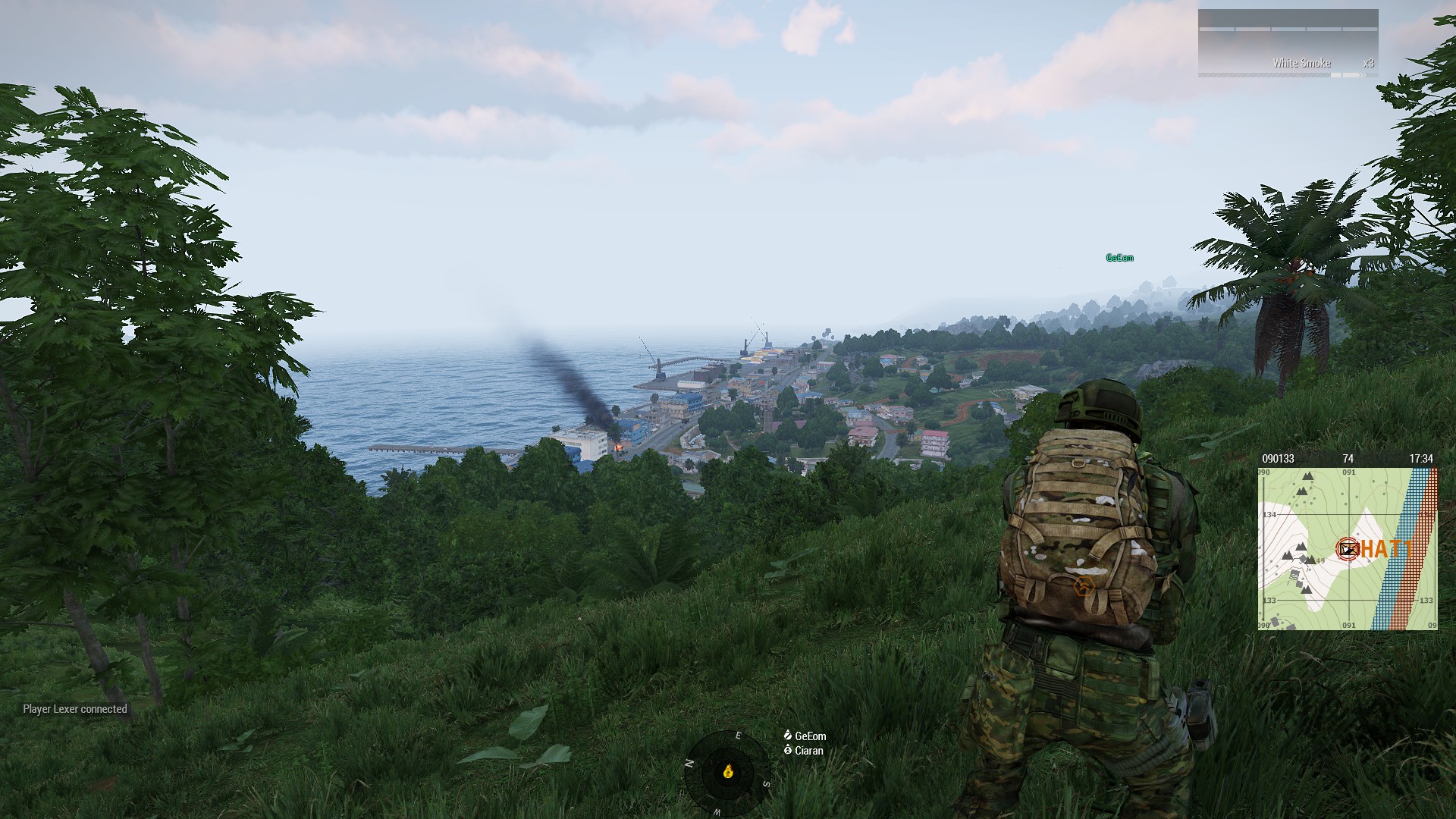 Signature, noun; a person's name written in a distinctive way as a form of identification in authorizing a cheque or document or concluding a letter.
Top
Post Reply
4 posts • Page 1 of 1